Johnny Depp’s Rango toppled the competition at the box office this weekend, proving Depp is a box-office draw even in animation.

Johnny Depp plays a likable lizard in Rango and managed to ride past the Matt Damon-starring Adjustment Bureau with a cool $38 million opening weekend showing. 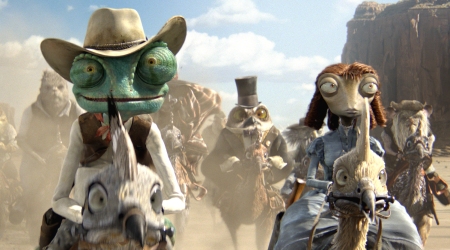 Damon’s romantic thriller The Adjustment Bureau, also starring Emily Blunt, managed to bring in $20.9 million for the number two spot while Vanessa Hudgens’ Beastly, a modern take on Beauty and the Beast, opened to $10.1 million.

Rounding out the top five were the Owen Wilson-starring Hall Pass, which debuted strong, coming in at number four with $9 million and Gnomeo and Juliet which came in at $6.9 million.

Liam Neeson’s Unknown and Oscar-winner The King’s Speech took spots six and seven with $6.6 and $6.5 million. The King’s Speech, which recently had a fantastic showing at the Academy Awards, has now brought its gross estimated total to $123 million.

Just Go With It stayed on the box-office chart at number eight with $6.5 million while I Am Number Four nabbed $5.7 million. The Justin Bieber documentary-concert film Never Say Never managed to round out the top ten with $4.3 million, bringing his gross total to an estimated $68 million.

Just as a side note, many had high hopes for the ’80s inspired flick Take Me Home Tonight, but its debut crashed and burned with a mere $3.5 million.

Did you happen to catch Johnny Depp in Rango this weekend? If you didn’t, we highly suggest you do.