Sean Penn is lending his support to his old pal Charlie Sheen, offering the fellow actor a spot in his humanitarian aid effort in Haiti. 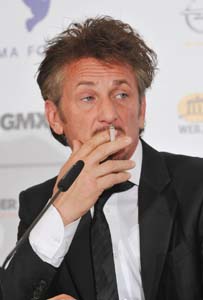 Sean Penn believes in Charlie Sheen — and to prove it he’s offering Sheen a spot helping him rebuild Haiti.

Having been friends since high school, Penn has a uniquely personal view of Sheen and his recent exploits.

“When you divorce the moral judgments, which I prefer to do, I see a guy who has a clearer view of the nature of the world around him than is sometimes comfortable to have,” Penn said in an interview for the April issue of GQ.

“Those are the sort of people who have a tendency to find altered states. But [Charlie] is a very ironic character. He’s got pretension in the crosshairs of his wit. I think to a large degree he’s saying, ‘Guys, we’re only going to be here once, so lighten the f–k up.'”

Now Penn wants Sheen to put that clear world view to a greater purpose by helping his humanitarian efforts in Haiti.

“I think his energies, intelligence and passion could be both of service and servicing to him, as it is to all who are touched by the struggle of the Haitian people,” Penn said.

“Charlie is one of the very few public people who cannot be accused of using the media to his own benefit,” Penn continued. “I would very much like to show my old friend the world of needs on the ground in Haiti, and introduce him and his tremendous wit to our hard working Haitian staff. If he chooses to give support, I’ll trust it.”

Sheen seems anxious to bring his winning attitude to the Haitian people.

“We’re going to do a couple things first and then it looks like we’re heading down (to Haiti),” Sheen said. “And I’m excited as hell because, you know, if I can bring the attention of the world down there, then clearly this tsunami keeps cresting.”