Against all odds, Phil Collins is leaving the music industry. 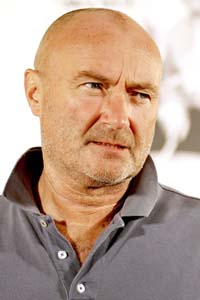 Phil Collins has officially announced his retirement from the music biz, citing multiple injuries as his reasoning.

Collins, the lauded drummer and vocalist for Genesis and successful solo artist in his own right, says his decades behind the drum set caused nerve damage to his hands, a dislocated vertebrae and hearing loss.

This might be news to us, but Collins removed himself from the scene a while ago. He moved himself and his sons to a remote mountain village in Switzerland where they live off his music riches in relative obscurity.

“I don’t really belong to that world and I don’t think anyone’s going to miss me,” Collins, 60, told FHM. “I’m much happier just to write myself out of the script entirely.”

Collins has won seven Grammys and an Oscar, has 13 hit singles, sold more than 150 million albums as a solo artist and is responsible for one of the most dramatic percussion moments in pop music, the explosive drum burst towards the end of In the Air Tonight.