Eva Longoria may be reveling in her new relationship, but there’s at least one person who isn’t happy for her: Her boyfriend’s sister, Penelope Cruz! 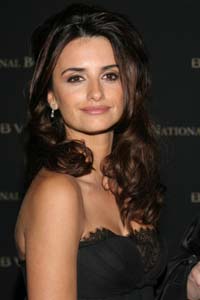 Eva Longoria knows the old adage well: There’s no better way to get over somebody than to get under someone else. Unfortunately for her, the somebody she’s getting under is Eduardo Cruz, and his big sister Penelope Cruz has it out for the Desperate Housewives star.

Rumor has it that new mom Penelope absolutely hates Eva and thinks she’s just using Eduardo to get in with the A-list crowd.

“Penelope believes Eva is nothing more than a fame-hungry, bad B-list actress who is using Eduardo in an effort to further her career. Penelope doesn’t understand why Eduardo is settling for a woman nearly 10 years older — especially one who failed so spectacularly at her last relationship. She thinks Eduardo can do much better than Eva. She’s always reminding him that he’s young, gorgeous and successful and that he could have his pick of women,” said the source.

So apparently they won’t be having family Sunday dinners together any time soon?

“Penelope has no desire to get chummy with Eva,” the source added. “And she wishes she’d leave her baby brother alone, too.”

Meow! Penelope could totally take her.

read on for more penelope cruz