David Arquette was involved in a head-on collision in West Hollywood Friday afternoon. Is Arquette OK?

David Arquette was involved in a head-on collision in West Hollywood Friday afternoon and is injured, TMZ is reporting. 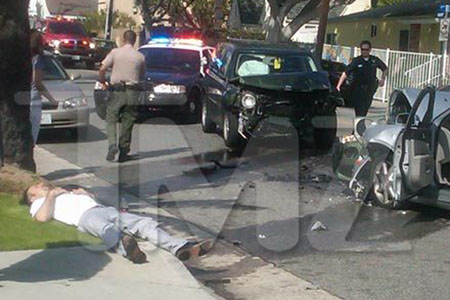 Arquette was driving a silver Cadillac when a car in front of him stopped suddenly. He quickly veered to the left to avoid a collision and crashed head-on into a vehicle going the opposite direction.

Scene photos show Arquette’s severely-smashed Cadilliac — with a bleeding and injured Arquette laying on a grass patch nearby.

TMZ is reporting that an ambulance arrived on the scene and took Arquette to a hospital. The accident comes just weeks after Arquette’s release from rehab and his strange interview with Oprah.

Here’s hoping Arquette isn’t seriously injured and is released from the hospital quickly — we want to see him get back to a happier place in his life.

Update: Arquette is fine, but is receiving treatment at an L.A. hospital, his rep confirmed to People.

Stay with SheKnows for more details on this developing story.