Eric Clapton is putting dozens of his guitars and amps up for auction March 9 to benefit an Antigua-based alcohol and drug center he founded. 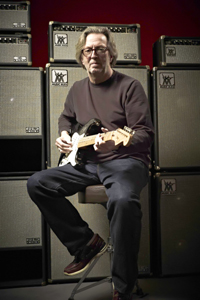 If you are a big Eric Clapton fan, here is your chance to pick up some of his famous guitars. The Hall of Fame rock star is auctioning off 70 guitars and 70 amps at a New York City auction on March 9.

Clapton, 65, will part with his custom-made black Fender ‘Eric Clapton’ signature Stratocaster, which is estimated at $20,000 to $30,000. He used this guitar during the New York and London Cream reunion shows in 2005. He is also selling a 2004 Martin 000-ECHF Bellezza Bianca, which is estimated to go for $15,000-$20,000. If you don’t have that kind of money to spend, there will be some items available that will go for much less.

He also plans to auction off a pair of 1970 Marshall vintage basket weave speaker cabinets, estimated to be worth between $8,000 and $10,000.

The auction will take place at the Bonhams & Butterfields auction house in New York, however, you can also bid online.

Clapton, who is a recovering addict, helped to establish the Crossroads Centre in Antigua in 1998.

“I am very happy that Bonhams have agreed to host my third guitar auction in aid of the Crossroads Centre, Antigua, the drug and alcohol rehabilitation centre I founded in 1998,” said Clapton.