Nostalgic for 1980s movies? Well, you’re in luck! Take Me Home Tonight has everything you could ask for, including a totally bitchin’ soundtrack.

Take Me Home Tonight could have been made in the ’80s. It was meant to look like it, though the hair is decidedly more normal than we would have done it back then. Topher Grace plays Matt Franklin, a smart guy (which in the ’80s meant “loser”) with a ton of potential. He could do anything he wants with his life — he’s a math genius and he’s unaware that he’s adorable. 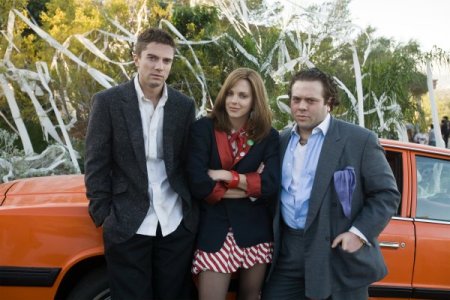 He just doesn’t know what the next step in his life is, so he’s working at Sun Coast Video until he figures it out. He runs into his high school crush, played by Teresa Palmer (also refreshingly intelligent, which is a bit of a departure from that era) and pretends to be a successful banker. When she asks if he’s going to the local reunion bash thrown by the pastel-wearing douche Kyle Masterson (Chris Pratt), he concocts an elaborate story about his life, his friend/sidekick steals a fancy car from his old job and off they go with Matt’s sister Wendy (Anna Faris) to the shindig.

Take Me Home Tonight has got every single solitary element you’d expect there to be. Adorable underachiever who was never appreciated by the girls in his class. Hot chick who needs his awesomeness spelled out for her. Sidekick who does outrageous things. (In this case, sex with an older woman, played by Angie Everhart, while being watched by a creepy guy, massive amounts of cocaine and a dance off that has to be seen to be believed.) Some big event that proves how amazing his life is. Dad who doesn’t get him. Cops, bad clothing and a love scene that you will forever compare your life to. And the soundtrack? Oh dear God, it’s wonderful. It was really hard not to sing along. Strangely missing though was the Eddie Money song, Take Me Home Tonight.

Sure, it’s goofy. If anyone did that much coke, I’m assuming their face would explode. Well, maybe not Charlie Sheen. He’s got tiger blood, you know. (Sorry, there was really no way to avoid a joke about him there.) Never in the world have so many events aligned to produce a scenario like this. But reality wasn’t really the buzz word back then, was it? That coke scene is actually the reason that the film took four years to be released.

Here’s what I’m saying. It’s not high art. It’s not going to move you to save the world. But if you like films from that era, you’ll be laughing your ass off. Part of that is the cast. Though Anna Faris is terribly underused here, Teresa Palmer (recently seen kicking ass in I Am Number Four) is astonishingly likeable. Topher Grace has the role of underdog down to a science. Their chemistry is fantastic. And Dan Folger is so over the top as Matt’s best bud that you totally expect him to be in a room with a half naked Angie Everhart, despite his hair. It’s a totally bitchin’ nod to ’80s rom coms, if you’re old enough to get it.