Ryan Seacrest hosted the live American Idol results show last night that seemed to drag on forever. Despite the two-hour drag-out, America picked its top ten finalists, but there was a twist. The top ten turned into the top 13 with a judges’ wildcard round that might leave some pleasantly or unpleasantly surprised. 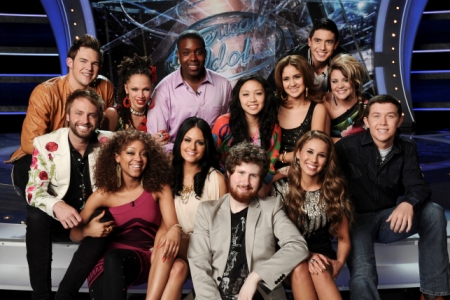 So, who is moving on to compete for your American Idol votes? The men killed their performances and they all deserved to move on. Jacob Lusk, country crooner Scotty McCreery, the sexy Casey Abrams, James Durbin and Paul McDonald have moved on to represent the men. Stefano Langone nabbed the last spot for the men with the judges’ wildcard pick. Shockingly, Clint Jun Gamboa, Jovany Barreto, Tim Halperin and Robbie Rossen were sent packing.

It really wasn’t the best week for the ladies as their performances weren’t as great with the exceptions of Thia Megia, Lauren Alaina and Pia Toscano who are all moving on. Joining them to sing another day are Karen Rodriguez and Haley Reinhart with Naima Adedapo and Ashton Jones grabbing wildcard picks. Leaving American Idol were Rachel Zevita, Lauren Turner, Julie Zorrilla, Kendra Chantelle and Ta-Tynisha Wilson.

What do you think of the American Idol top 13? Will you be watching when they take the stage next week or have your favorites already been eliminated? We would have liked to have seen Brett Loewenstern move on. Something tells us this season’s American Idol might have some surprises in store.