Mike Myers is a married man again and he kept it a secret. Myers married longtime girlfriend Kelly Tisdale privately in NYC over five months ago. 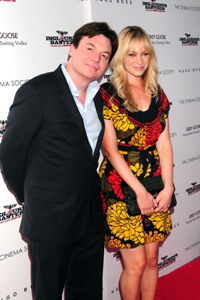 It’s been a long time coming, but actor Mike Myers finally married his longtime girlfriend, Kelly Tisdale. This might shock you, but we’re not saying they entered into wedded bliss yesterday — they did it over five months ago!

Mike Myers’ rep confirmed the news to the New York Post’s Page Six. The couple said “I do” during a private wedding in the Big Apple. Private is right, especially if we’re just hearing about the New York wedding over five months later. Congrats go out to Mike Myers and Kelly Tisdale for keeping that secret. That is not an easy thing to do in Hollywood.

The 47-year-old Shrek actor and Kelly Tisdale have been dating since 2006. The courtship began after Myers and his wife Robin Ruzan divorced in 2005 after 12 years of marriage.

Myers and Ruzan often had a loving public relationship with him labeling her as the inspiration for much of his work including the man of mystery himself, Austin Powers. Robin Ruzan’s mother, Linda, was also the inspiration behind the Saturday Night Live character and coffee-talker, Linda Richman.

Mike Myers and Kelly Tisdale kept a great day to themselves for over five months, so kudos to them. Congratulations on your new marriage! You deserve it!