Julianne Hough is taking on the role of Sherrie for the film adaptation of Rock of Ages and she’s all a twitter about it. 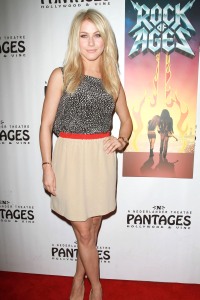 Looks like Julianne Hough is preparing to be the next darling of musical movies. The Burlesque actress and one-time Dancing With the Stars champion is tackling a role that will bring out her inner rocker. It’s confirmed that Hough will be starring in New Line’s film adaptation of Rock of Ages with Tom Cruise.

Twenty-two-year-old Hough is slated to take on the starring role of Sherrie, a small-town girl with a dream and an eye for Tom Cruise’s character Stacee.

The dancer, singer and actress announced the big news via her Twitter account on Thursday night. “Thanks to everyone for all your good vibes and good luck wishes,” she tweeted. “It worked! I got Rock of Ages!”

Does this mean her boyfriend Ryan Seacrest will get all the Rock of Ages exclusives first?

Hough added via Twitter, “Seriously you guys, I’m dying right now. I’m so excited and can’t wait for this journey of becoming Sherri! It all starts NOW!”

Hairspray director Adam Shankman will be directing Rock of Ages for its big screen takeover. Do you think Julianne Hough and Tom Cruise will do Sherrie and Stacee justice? Should the film have been left to the stage given Constantine Maroulis’ original performance?