Miley Cyrus kept tweens entertained as Hannah Montana, but does she have the chops to carry Saturday Night Live? We’ll find out on March 5, when she takes the stage as SNL host for the first time! 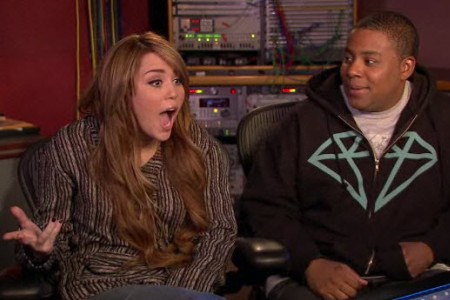 “I don’t know if you’ve seen Hannah Montana, but I’ve parasailed as a chicken before, so I’m not afraid to do anything,” Cyrus told Access Hollywood.

SNL has already gotten laughs at her expense with The Miley Cyrus Show sketch, in which Vanessa Bayer plays a ditzy Miley. SheKnows is curious to see just how ready Cyrus is to laugh at herself for viewers, but sadly, it doesn’t sound like she’ll be a guest on SNL‘s recurring parody of her.

“I’m a big fan of The Miley Cyrus Show that they do of me,” Cyrus said. “I’m not saying I want to be in it, I just want to see it live at some point. It’s good humor — it’s funny but it’s nice — they never make you look bad.”

The 18-year-old singer-actress appears to be on a mission to prove she’s grown out of Disney and Can’t Be Tamed, while becoming reliable fodder for gossip. She’s made news with her sexy outfits, birthday salvia bong hit, tattoos and boyfriend buzz, not to mention her father Billy Ray’s heartbreaking GQ interview.

Cyrus, who ranked thirteen on Forbes‘ 2010 Celebrity 100, has done more to shake her Disney queen rep than just act out, however. She has two big movies in the can. LOL: Laughing Out Loud, with Ashley Greene and Demi Moore, is due out later this year and word is her FBI-sorority comedy So Undercover with Jeremy Piven will hit theaters in October.

First up, however, musical guests the Strokes will join Cyrus for the March 5 SNL, which starts at 11:30 p.m. on NBC.