Take Me Home Tonight takes moviegoers back to the 1980s, the golden era of teen flicks. The retro comedy premieres today and stars Topher Grace, Anna Faris, Dan Fogler, Teresa Palmer, Chris Pratt, Michelle Trachtenberg and Audrina Patridge as young LA locals who end up having the “Best. Night. Ever.”

Recent college grad Matt (Topher Grace), his twin sister Wendy (Anna Faris) and his best friend Barry (Dan Fogler) are trying to figure out what comes next in the comedy Take Me Home Tonight, which hits theaters Friday, March 4. 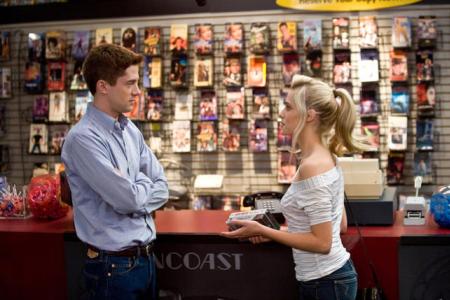 The action centers around math whiz Matt, who has an MIT degree, but no clue what he wants to do with it. Instead of falling into a cushy job at Goldman Sachs like so many of his classmates, he heads back to Los Angeles and lands a gig at a mall video store.

Of course, when Matt’s high school crush Tori (Teresa Palmer) walks into his store, the story is a little different. He tells her he’s doing the Wall Street thing.

Duly impressed, Tori asks Matt if he’s going to the blowout Labor Day party at Kyle’s (Chris Pratt). Determined to land the girl of his high school dreams, Matt sets out with his sister and best pal on what turns into a madcap night rife with dance-offs, stolen cars and emotional breakthroughs.

With a 1988 party as the central event and an R rating, Take Me Home Tonight features lots of sex, drugs and 1980’s jams. In fact, the drug use almost killed the movie, which was originally entitled Kids in America. Release was delayed while the producers contemplated whether or not they had to cut out some of the cocaine use. Four years later, Take Me Home Tonight is hitting theaters and, word is, none of that controversial partying is missing.

Take Me Home Tonight goes for laughs, while embracing the spirit of ’80s teen flicks, from John Hughes faves like Ferris Bueller’s Day Off to LA party anthem, Less than Zero. The film was written by the writers of That ’70s Show, which is where Grace got his start.

Not sure you’re ready to go back to the 1980s? SheKnows has the Take Me Home Tonight trailer to help you decide.