Just days after it was announced Michael Lohan will appear on Celebrity Rehab, daughter Lindsay Lohan released a statement saying she wants her father to stop talking about the family. 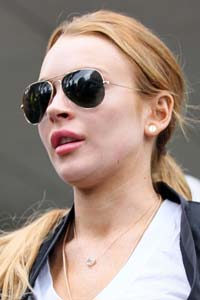 Lindsay Lohan‘s relationship with her father has always been contentious at best, but now Lindsay is firmly speaking out against Michael Lohan’s latest very bad idea: He is set to appear on the next season of Celebrity Rehab.

“I am sorry that my father has continually chosen to speak publicly about our relationship, my mother, my siblings, and my professional team,” Lindsay told RadarOnline.com.

“I am working through my recovery day-by-day and find his public media bouts unnecessary and damaging.”

For a while there it appeared that Lindsay and Michael had repaired their relationship — Michael was part of family counseling at Betty Ford and has been seen around her Venice apartment multiple times.

It will take more than a few quick weeks to repair past wrongs though, says a friend.

“Lindsay blames a lot of her problems and issues on her dad,” said a source close to the actress.

“His name came up constantly,” the source said. “Lindsay has a lot of unresolved feelings and anger towards Michael.”

Michael Lohan is rumored to be checking into Celebrity Rehab to deal with anger management issues — and the family stuff will definitely come up.