Bobbi Kristina, the daughter of Whitney Houston and Bobby Brown, responds to pictures circulating that show her allegedly snorting cocaine. 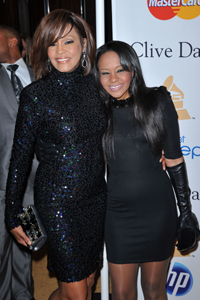 The National Enquirer was the first to publish the photos of 17-year-old Bobbi Kristina Brown allegedly snorting cocaine, leaving many to believe she was following in the same footsteps as her parents, Whitney Houston and Bobby Brown, who have struggled with addictions.

The tabloid said that Bobbi is “hooked on cocaine and booze” and had several pictures showing what appeared to be Bobbi doing drugs.

Bobbi took to Twitter to defend herself, saying she was framed by her ex-boyfriend and that her mom, Whitney, “comforted” her.

Check out the statement below in full:

“The pictures_ a former very dear person to me did this. Set me up to make it look exactly what it looks like. God will smite them yes..But it’s really not what it looks like.. People will do anything for money which is extremely sad, and I’m very hurt by this. Thing’s people do these days to hurt others is a shame. All I can do now is keep my head up high, keep looking towards the lord. All the lord is telling me is be still. That’s all, and that’s exactly what I’m going to do. #BeStill.

I love my family so much. My mom just comforted me to the max, and I’m so thankful for her. Thank you so much lord for blessing me with an Phenomenal family and incredibly phenomenal mother. Thank you for giving me the strength to move forward and put things in the past.

And the person that did this was a result of a horrible relationship that went sour. I was in love_ he was in love with money. I’ve learned My lesson. I’m so much greater and blessed for it today, and I believe nothing less. That is the last I will speak of this, let’s praise god And be greatful and thankful for your family, and people that truly love you, strength, courage, and life lessons learned.”

Read on for more Whitney Houston: