Aretha Franklin sat down on The Wendy Williams Show to talk about her health and her amazing 85-pound weight loss.

Aretha Franklin, 68, spoke with The Wendy Williams Show on Wednesday about her astounding weight loss — and her mysterious health issues.

“I’ve been looking at a lot of pictures, and I was saying [to myself], ‘You were entirely too fat for words,'” the Queen of Soul said, telling Williams she has lost about 85 pounds. 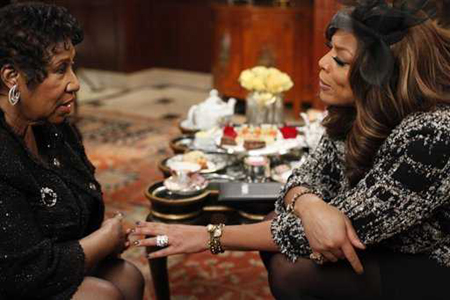 Franklin said she has focused on changing her diet — including avoiding food “smothered” in hot sauce. “That’s off the menu now… and no pig feet, either.”

She reveals that she had a difficult time losing the weight. “I was doing everything you could to lose that weight, and it’s hard. It’s just really hard. [But] you can’t continue eating things that will hurt you eventually.”

Franklin kept mum on her mysterious ailment, which was rumored to be everything from pancreatic cancer to complications from a gastric bypass or weight loss surgery.

“A lot of things were said. I left that behind,” she added. “And I couldn’t be feeling any better than I’m feeling right now.”

Dr. Lawrence Koplin, a Beverly Hills surgeon, has not treated Franklin, but told Fox News that it’s likely Franklin did undergo surgical weight loss. “Losing this amount of weight with exercise and diet would require a strict, strict team, and is said to be impossible especially [for] those above 40 with a slowed metabolism,” Koplin said. “Surgical correction is the fastest way to see an 85-pound weight decrease in just a few months.”

Although Franklin has not commented or confirmed these claims, speculation is that the Queen of Soul did not have cancer, but became seriously ill due to complications from gastric bypass surgery.

Regardless of her weight loss path, it is good to see Franklin thinner and healthier than she has been in years.