Lady Gaga strutted down the catwalk to rave reviews during Thierry Mugler’s 2011-2012 fall-winter show in Paris, prompting us to wonder — are we really that surprised she did so well? 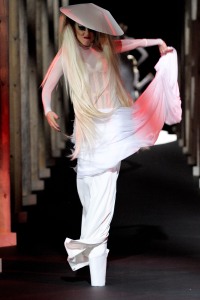 With all that drama draped on one body, is it really shocking that Lady Gaga, queen of avant-garde clothes, would do so well on a Paris runway?

Lady Gaga made her Paris runway debut this Wednesday, during Mugler’s fall-winter 2011-12 fashion show. The collection was ready-to-wear, so what in the world does that mean to Lady Gaga?

During one walk down the runway, the theatrical artist strutted her stuff in a black top that was as sheer as the day is long and a pencil skirt that wasn’t just your average pull-on piece — it was painted on. She finished off the look with her Gaga statement piece — platform shoes.

Mugler’s fashion show was housed in a gym located in an average neighborhood in Paris but there was nothing average about the crowd waiting to catch a peek of Lady Gaga. The Born This Way singer actually announced her participation in the show via Twitter, which may have accounted for the overload of onlookers.

Gaga recently debuted her new video for her hit single Born This Way, taking rebirth to a whole new level.