Would you pay over $40,000 for a piece of Justin Bieber? Someone would, because Justin Bieber’s hair made a nice chunk of change for charity on eBay. 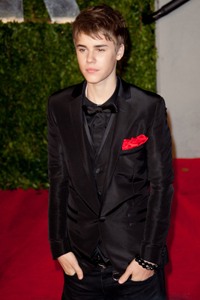 Don’t ever say Justin Bieber isn’t generous. The teen music sensation and recent moviemaker, recently presented Ellen DeGeneres with his equally famous locks for her birthday and now the Gentle Barn Foundation is reaping the benefits.

Ellen DeGeneres immediately put Bieber’s hair up for bid on eBay and while it might have been a slow climb, a final offer of $40,668 was locked in. What do you think is going through a 17-year-old’s mind when he realizes his hair is worth $40,668? We’d like to know.

The final bid of $40,668 via eBay will go to the Gentle Barn, which is an organization that helps “neglected and abused” farm animals.

As for Justin Bieber, his hair isn’t the only hot commodity these days. Cameras have been capturing every move of his recent public debut with Selena Gomez. The buzz was that these two were an item, but after stepping out together at the Vanity Fair Oscar viewing party and packing on the PDA, we can safely say they’re ready for the world.

Music man, moviemaker, attentive boyfriend and now giver. Is there anything else left for Justin Bieber to tackle these days? Oh yeah, he starts a world tour on March 4. That sounds like the good life to us.