Are your kids yearning for more Toy Story movies? Even though Toy Story 3 was the last feature film, Toy Story: Hawaiian Vacation is an upcoming short film starring all their favorite characters. Watch a sneak peek of the trailer here!

Toy Story: Hawaiian Vacation is a short film starring all of the gang that is set to run with the new Cars 2 movie, slated for release on June 24.

Toy Story: Hawaiian Vacation picks up where Toy Story 3 left off and shows the gang living with Bonnie. This film focuses on Barbie and Ken, as they catch a ride in Bonnie’s backpack to Hawaii, however, they soon realize they are back in her bedroom and didn’t make it to their exotic destination. Ken goofed up their big vacation plans! 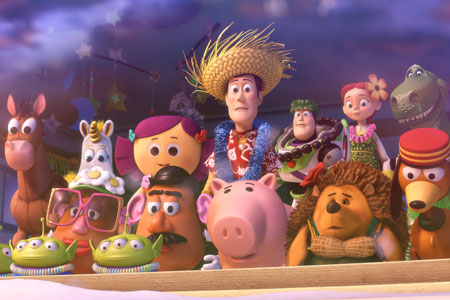 Woody, Buzz, Jessie, Rex and the gang show up to help turn the room into the perfect romantic vacation for Barbie and Ken.

Directed by seven-time Academy Award winner Gary Rydstrom, this 3-D animated short film is sure to delight Toy Story fans. He tells EW that all the original voice actors, including Tom Hanks, Tim Allen and Don Rickles, returned for this movie. Michael Keaton returns as the voice of Ken and Jodi Benson (who was also the voice of the Little Mermaid) returns as Barbie.

“We wanted to figure out a story that would include everybody, which is crazy because it is under six minutes,” says Rydstrom. “It takes place in Bonnie’s room — Woody, Buzz and Rex and everybody is in on it. Ken wants to take Barbie on a perfect vacation to Hawaii by stowing away in Bonnie’s backpack, but they get left behind in the middle of winter while she goes off without them. Ken kind of screwed up. Barbie probably does all the planning, and he tried to plan this one.”

Check out the teaser trailer for Toy Story: Hawaiian Vacation