It’s been a two-year wait, but Beastly is finally debuting in theaters on Friday, March 4. Alex Pettyfer and Vanessa Hudgens find love in a modern-day take on Beauty and the Beast that promises to be less fairy tale and more edgy romantic fantasy. Mary-Kate Olsen, Neil Patrick Harris and Lisa Gay Hamilton also star.

Beastly, based on Alex Flinn’s young adult novel of the same name, brings a classic tale to modern-day New York City. The action revolves around gorgeous Kyle Kingson (Alex Pettyfer), a big man on campus who can be a real jerk. When the 17-year-old crosses a classmate (Mary-Kate Olsen) who happens to be a witch, she curses him with a spell that makes him as “aggressively unattractive” on the outside as he is on the inside. 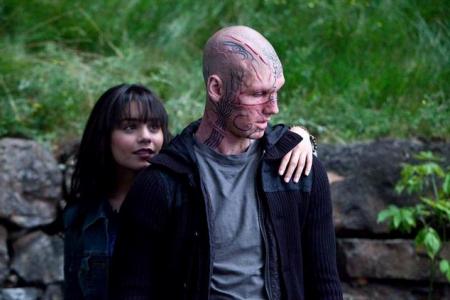 Witchy Kendra gives him one year to counteract the spell by finding someone who loves him, in spite of his new look. If he fails, he’ll be stuck that way forever.

In the book, Kyle was saddled with fur and fangs. In the big screen version of Beastly, it’s another matter. Kyle goes from being a mainstream beauty with a gorgeous blond mane to being a skinhead with a face, head and body covered in scars and tattoos. Some circles might even find him handsome, but Kyle’s father (Peter Krause) doesn’t take the transformation well and banishes his son to Brooklyn with a housekeeper (Lisa Gay Hamilton) and blind tutor (Neil Patrick Harris).

Vanessa Hudgens stars as Lindy, the Beauty in Beastly. In the original tale, Beauty’s father is caught stealing a rose and has to hand over his daughter to appease the Beast. In this edgy version, Lindy’s father is an addict caught trying to kill a drug dealer and Kyle offers her refuge in his home.

Once he has Lindy in his house, he tries everything to woo her and ultimately, we assume, he learns his lesson and gets it right. But will he get there in time?

The first trailer for Beastly hit theaters on November 20, 2009, but the actual release kept getting bumped. First, they didn’t want Hudgens’ film to conflict with Zac Efron’s Charlie St. Cloud and upset their fans, so the July 30, 2010 date was pushed. Then CBS Films had trouble finding any summer dates without conflicts. Then it was scheduled for later this month, but now, finally, Beastly is coming to theaters Friday, March 4.

In spite of the long wait, Pettyfer and Hudgens have already gotten good buzz from Beastly. Pettyfer is also selling tickets to I Am Number Four, in theaters for the last month. America knows a heartthrob when they see one, but there’s also been a recent spate of gossip that has the British hunk earning a rep as a bad boy and a diva.

Stay with SheKnows as we premiere our interview with Beastly stars Vanessa Hudgens and Alex Pettyfer!