We’ve seen The Adjustment Bureau and it’s pretty fantastic. Check out our review below! 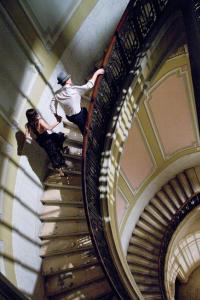 It’s an age old question. Do we have free will or are our lives subject to some sort of plan? It’s asked in all religions and cultures. I’ve heard people who don’t believe in fate say things like, “I just met this guy and it feels like we were meant to be together.” Or, “I know I just lost my job, but it’s only because something better is around the corner.” “If I’d never met that jerk, I never would have been in the right place at the right time to do blank. It was meant to be.”

In The Adjustment Bureau, screenwriter, director and producer George Nolfi gives us a look at one version of the answer. Based on the short story by sci-fi writer Philip K. Dick, the film expertly navigates what might happen if there was a master plan in the works. Matt Damon stars as politician-on-the-rise David Norris. Impulsive by nature and driven after losing his family, David is on his way to the top. He loses an election because of photos of his butt (yes, it’s timely too) but is expected to go all the way to the Oval Office…after a chance meeting with a woman (Emily Blunt) inspires him to make the best speech of his career. David runs into her again on a bus and the two start a romance, though it was never supposed to happen. A group of adjustors are meant to keep them apart and on track for their fates. You’ve seen it in the commercials, but they can freeze time and readjust our thoughts to keep us on the path we were meant to follow. Giving you any more info would get me in trouble for spoilers, so I’ll leave the synopsis there.

I’ll go ahead and say it. Why the hell was this film released at the beginning of March? It’s usually the dumping ground for less than stellar films. (Though, I’ll admit, there are a number of better than average offerings this month. A new trend?) The Adjustment Bureau is incredibly well thought out and perfectly cast. Damon and Blunt have so much chemistry, the screen practically melts when they look at each other. To anyone who’s only seen Blunt in The Young Victoria, wonderful though it was, you have no idea what you’re missing. This lady is hysterical. There were moments where you really weren’t sure if the comedy was written or just came out of the acting work. Damon…well, has he ever done anything unwatchable? He’s Jason Bourne for goodness sake. (Please note: Nolfi wrote the screenplay for The Bourne Ultimatum.) Without the correct chemistry, a film like this could have fallen flat. With these two, the concept of love at first sight is absolutely believable and keeps you from over-thinking the mythology of the story. 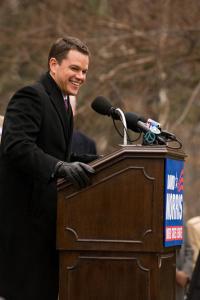 The adjustors are played by Anthony Mackie, John Slattery and Terence Stamp (among others) and give us…oh, I don’t want to spoil anything here…just the right amount of “company man” and “otherworldly presence.” I wish I could say more. The film is part sci-fi, part love story and part thriller. The sci-fi aspects, like doors that open, portals for anyone wearing the right key and who is running the joint, effectively straddle religion and science. Always a touchy area, that. Here, we steer clear of anything too specific in the religion area. Sure, there were issues and places where I said things like, “But wait…what are the hats? Why can they do this but not that?” But those little questions fell by the wayside. The story (both sci-fi and love) took over and threw them right out of my head. Some films get too bogged down in the details and explanations that work really well in a book series but make a movie trudge along.

Finally, I’ll say this about the ending. I would have been as happy with a different final outcome as I was with this one. To me that says the draw of this film is not whether or not they end up together, as though this were a hanger of a narrative to place the jacket of a love story on, it was the journey there that had me intrigued. That’s the highest praise I can give a sci-fi film.