Johnny Depp reunites with Pirates of the Caribbean director Gore Verbinski for an animated movie like you’ve never seen in Rango. The title character, as voiced by Depp, is an adventurous pet lizard, who when given the opportunity to experience thrills that he’s been dreaming of, must summon the courage necessary to save a desert town and himself.

Rango, like Gnomeo and Juliet, is artistically unlike anything animation fans have witnessed before in its ability to capture detail in the minutest of details. Whereas Gnomeo and Juliet’s animators captured the variety of tiny cracks in a garden gnome, the animators on Rango give the audience a virtual lesson in the intricacies of desert critters starring Johnny Depp. 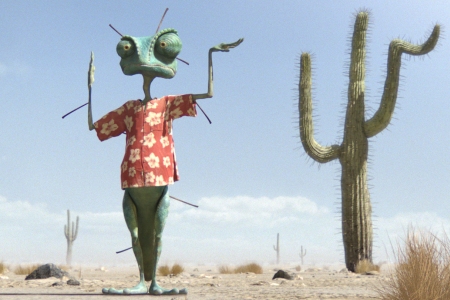 There’s the desert mouse (Abigail Breslin), evil rattlesnake (Bill Nighy) and a mayor who is a turtle (Ned Beatty). Each is created with impeccable attention paid to the details that allow the brain to tell you that what you witness is real. Rango achieves that feat in droves.

What else makes Rango so real is how director Gore Verbinski had his actors act together as if they were rehearsing a play. He would capture their vocals and the reality in each actor’s performance. Normally on an animated film, the actors solely work in a studio with only the director on the other side of a glass window sitting at an audio board.

Verbinski has been repeatedly asked why he didn’t have Rango released in 3D. His reply is indicative of the reality of what is portrayed on screen by Johnny Depp and company. “I thought it already was,” he admitted. We can attest to that fact. The colors, characters, foreground, background and soundtrack are perfectly combined to create an astoundingly delightful time at the movies. 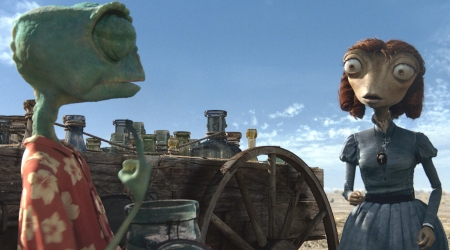 At the center of the film, whether it’s providing the voice of the title character, driving the storyline with his onscreen actions or commanding presence in each frame of the film, Johnny Depp’s characterization in Rango is uncanny. He should seriously be doing more animated movies.

When Isla Fisher‘s Beans meets Depp’s Rango in the desert outside of the town of Dirt, the audience is immediately informed of the fact that the deliciousness that is Johnny Depp’s performance as Rango is matched note for note by Fisher — their scenes together pop.

If Rango gives adult audiences the feel of the artistic renditions of Hunter S. Thompson’s work, you are not alone. Keep an eye out for a certain someone to do a desert drive-by that is worth its weight in gold. 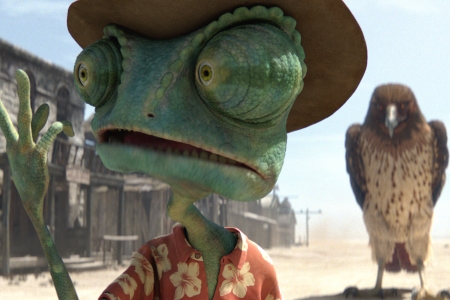 Above all, Rango is riveting, rejuvenating and renders its audience left completely impressed.

When Fisher’s Beans brings Depp’s Rango into the town of Dirt, a place void of water, hope and any kind of justice, the spark that goes off in Depp’s performance captures the character of a small lizard with equal parts circus ringleader, Old West sheriff, romantic lead and classic Hollywood hero. Yes, he’s just a lizard. But, that Rango is one extraordinary lizard.