The Disney Channel is premiering the Imagination Movers primetime concert special on March 6 at 6 p.m. SheKnows is proud to present an exclusive look at the big show that features Ace of Cakes star Duff Goldman jamming with the ‘N Sync’s Joey Fatone, who also serves as the evening’s host. 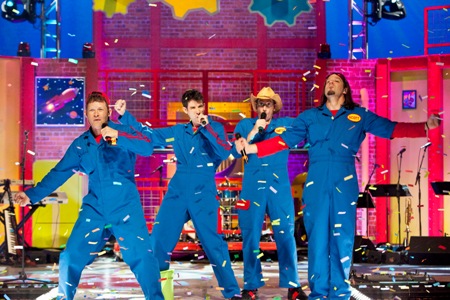 The March 6 concert will also cause more than a few viewers to get excited about the Imagination Movers as they are out on a 50-city national tour. The Imagination Movers are Rich Collins, Scott Durbin, Dave Poche and Scott Smith. Since they arrived on Walt Disney Records, the group has sold over 100,000 albums.

The Imagination Movers TV show features the band, always dressed in blue suits, as regular Joes who specialize in answering the call for “idea emergencies” in their Idea Warehouse, a place the Disney Channel describes as “a place of infinite inspiration.”

Imagination Movers airs on Disney Junior on the Disney Channel weekdays at 1:30 p.m. and weekends at 5 a.m.