The Johnny Depp character of Rango is a pet chameleon looking for adventure. The Hawaiian-shirt-wearing critter imagines himself a swashbuckling hero and when he stumbles into the desperate for a hero town of Dirt — that’s just what he must become. The Old West town is plagued by bandits and desperately in need of hope. Rango must rise to the challenge to become both sheriff and hero to a host of local animals, including an iguana named Beans (Isla Fisher), a cactus mouse named Priscilla (Abigail Breslin) and the mayor, Tortoise John (Ned Beatty). 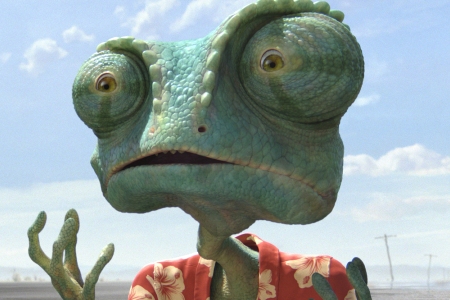 “Rango is a lizard attempting to adapt to his surroundings,” Depp previews. “He’s trying to figure out what he’s supposed to be, like most of us in life.”

The premise came from Pirates of the Caribbean director Gore Verbinski, was penned by Aviator scribe John Logan and then directed by Verbinski, who employed a new style of animation.

In other words, instead of working alone in various sound studios, the cast got together, put on wild costumes, grabbed some props and acted out the script. Their voices were grabbed during the performances, while the computer incorporated their expression and movement into the animation.

“It gives a bunch of grownups a chance to be silly,” said Depp.

Rango and the animation technique are both getting good reviews, so far. See for yourself this weekend. Rango hits theaters Friday, March 4, 2011.