Charlie Sheen relinquished his twin boys to police late Tuesday evening but the star isn’t taking it lying down. Sheen sat down with NBC’s Jeff Rossen to give his side of the story. 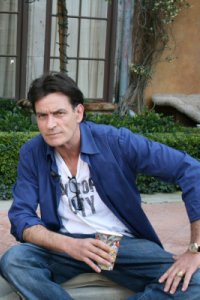 Honestly, some of us were starting to wonder if all the Charlie Sheen hoopla wasn’t the greatest publicity stunt since Joaquin Phoenix punk’d the nation with his rap career. But shortly after police removed Charlie Sheen’s soon-to-be two-year-old twins, Bob and Max, from his home, we’re not so sure.

Charlie Sheen sat down with NBC’s Jeff Rossen for an early morning interview on Wednesday, but it was not the same Sheen we’ve seen in the past few days. He was much more calm (but angry), not as colorful and more focused than ever. “At this moment, on live TV, I do not know where my children are,” Sheen told Jeff Rossen.

He added, “If anybody thought my focus was directed in a radical way, that’s going to seem like child’s play.”

Charlie Sheen’s estranged wife Brooke Mueller was recently granted a restraining order forcing Sheen to stay 100 yards away. But the biggest log in the fire was a judge’s decision to strip the actor of custody of Bob and Max. This latest move provoked the late night surrender of the children.

“This is about getting very focused, getting in touch with what I have to do to complete the task of bringing these two beautiful young men back to the home that they deserve to be raised in,” Sheen continued in the interview with Jeff Rossen.

Sheen insists his Sober Valley Lodge home is the perfect place to raise his young boys and challenges anyone to say otherwise. “I invite anybody at this point to come in and just observe — a court appointed monitor, somebody from her legal team, whether it’s her, or it’s you with a camera. There’s nothing to hide… there’s nothing but love or compassion,” he explained.

He added in regards to Brooke Mueller’s living situation, “It’s 100,000 times better than what’s going to be offered in her house.”

Our best goes out to those little boys, Bob and Max, and stay tuned to SheKnows for all the latest developments in the world of Charlie Sheen.