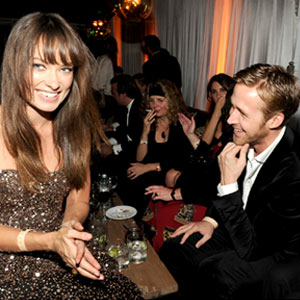 A mere three weeks after announcing her split from her husband, Italian prince Rao Ruspoli, House actress Olivia Wilde was spotted on a date with actor Ryan Gosling.

Wilde, 26, and Gosling, 30, were spotted at a very public spot — an aquarium in Cincinnati. Gosling is in town while filming The Ides of March, co-starring George Clooney and Evan Rachel Wood — but why is Wilde in Cincinnati? It appears the Tron: Legacy star was there to see her possible new boyfriend.

A fan filmed the couple holding hands and walking though the aquarium — and then uploaded the video to YouTube! Although the video has mysteriously “been removed by the user,” pictures of Wilde and Gosling at a Golden Globes after party show them being flirty and affectionate.

“They talked for a while inside the show during commercial breaks. Then when Olivia saw (Ryan) at the after party she went right up to his table,” a source tells E! Online. “They were talking and laughing together for a long time. They looked cute!”

Gosling has been linked in the past to his Blue Valentine co-star, Michelle Williams.

Was Gosling the reason that Wilde and her husband (who is a prince, by the way) split up after eight years of marriage? Sources tell UsMagazine.com that “she wanted to get divorced for the typical Hollywood reasons: Her career exploded and she saw being married as not much fun.”

Tell us: Do you think Olivia Wilde and Ryan Gosling make a cute couple?

Read on for More Olivia Wilde