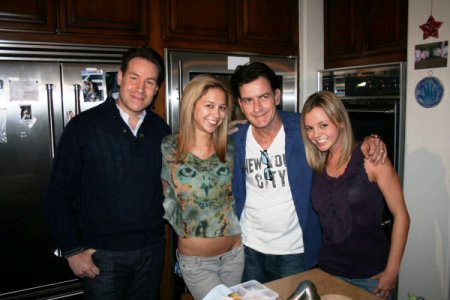 Charlie insists everyone has a vote in his new happy household. Of course, when his goddesses don’t vote the right way, he steps in.

“When we’re approaching crisis, I remind them I’m 22 years further down the road,” he said. “Trust me that most of the time — well, in the last few days, all the time — my plan is going to be the best one in the room. Trust me on that, and everyone will win.”

Goddess Natty seems to agree it’s working. “I respect Charlie as a man and the head of this household and trust him completely,” Natty told Today. “If there’s something I think is a little bad of an idea, I say, ‘Hey babe, let’s think about it this way.’ It works.”

Sheen reveals that while there are nannies around to watch after his twins, who are apparently with him full-time now, his goddesses are very involved. The girls also talk about being with the kids.

“Everybody helps out,” Sheen says. “There’s nothing broken here.”

The Two and a Half Men star again says he wants to get back to work. Sheen also wants his cut of the pay-out, but he’s glad the crew will be paid for four episodes and in fact takes the credit for getting them paid. Warner Bros denies that claim.

There’s much more to the newest interview, including interviews with Sheen’s goddesses, plus Sheen showing off his drug test and bragging, “They were negative.” Sheen also answers the concerns of his father Martin Sheen and brother Emilio Estevez. You can see all that and more in the clip below.

Whether the cause is drugs or chemical imbalance, Sheen is clearly suffering from a severe bout of mania. SheKnows hopes Sheen allows someone to help him, but after this peek at his goddesses, it won’t likely be them.