The Dancing With the Stars season 12 lineup has someone for every viewer to root for, from a legendary boxer to a 1980s heartthrob and from a Playboy Playmate to a Disney princess. Kirstie Alley, Psycho Mike Catherwood, Chris Jericho, Chelsea Kane, Sugar Ray Leonard, Ralph Macchio, Petra Nemcova, Romeo, Hines Ward, Kendra Wilkinson and Wendy Williams are ready to take their shot at the coveted mirror ball trophy.

Dancing With the Stars always offers what seems like a random collection of celebrities, but this time, the ABC hit show isn’t taking chances. If you’re a fan of anything at all, you’re likely to find someone for whom to root in this lineup! 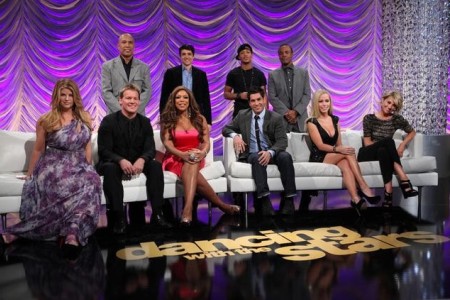 Hugh Hefner’s ex turned reality TV mom Kendra Wilkinson brings a strong fan base to the dance floor. She’s always been a tomboy at heart and thanks to her time as a Playboy Playmate, she won’t be uncomfortable showing some skin, but this isn’t baseball and dancing is about more than posing for the camera. It will be interesting to see how she fares.

Breakout talk show host Wendy Williams has the drive and the fans to win, as well. Her biggest hurdle may be her height. At five-foot, eleven inches, she’s a lot of woman to handle on the dance floor, especially since most (all?) of the male pros are shorter than her.

Kirstie Alley and Ralph Macchio are fun picks for those of us who were already watching TV and movies in the 1980s. Alley was a fave for her comic timing on shows like Cheers and Veronica’s Closet. She even nabbed a Golden Globe, two Emmys and three People’s Choice Awards back in the day, but most recently, she’s become known for her battle with the bulge and her series Fat Actress. Alley has now developed her own weight loss program, but will surely learn there’s no better way to shed the pounds than dancing off her booty!

Ralph Macchio posters graced many a teenage wall in the ’80s and he will always be The Karate Kid for many viewers, but that run was a long time ago and there’s a new karate kid now. Macchio has tried to make a comeback over the last few years. His string of reality shows didn’t earn him many new fans, but his run on Psych was a bit more fun. Perhaps his Dancing With the Stars performance will succeed where his own shows failed him. He once learned to wax on, wax off and kick butt. Can he learn to glide on the dance floor?

Punk rocker turned shock jock “Psycho Mike” Catherwood has earned a serious following since he started cracking folks up on KROQ’s Kevin & Bean morning show. His antics have earned him so much attention he’s gotten to work on Loveline Radio (Westwood One) with Dr. Drew Pinsky, E! Entertainment’s The Daily 10 and even Live with Regis & Kelly. But can he dance?

Cover girl Petra Nemcova already had fans for her modeling career, but won over the rest of America after she survived Thailand’s devastating 2004 tsunami. She’s long recovered from the broken pelvis and severe internal injuries. The question is: Will those injuries hold her back now?

Disney star Chelsea Kane (formerly Chelsea Staub) and rapper Romeo might have a tiny leg up, since they have both done some dancing. Kane has quite a resume, and not just for entertaining Disney audiences. She’s also done time on the national Broadway tour of Showboat and several other musicals.

Romeo, born Percy Romeo Miller, Jr., is a businessman, ballplayer and actor, but he’s also a Grammy winning rapper. He’s got moves on the basketball court and has had a chance to work some dance moves on stage. Ballroom, however, is a very different type of moving and shaking!

The Dancing With the Stars two-hour season 12 premiere performance show airs Monday, March 21 at 8:00, with the DWTS result show’s one-hour premiere on Tuesday, March 29 at 9.