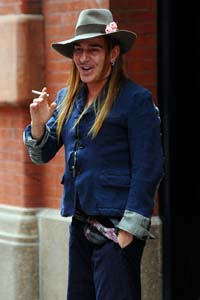 Famed French fashion house Dior has given John Galliano the boot after video surfaced proving a couple’s claim that the designer berated them with racist, anti-Semitic comments during a drunken rant.

While in the US such behavior is simply abhorrent, in France it is actually illegal and carries stiff penalties.

In their official public statement on the issue, Dior said:

“Following the allegations of anti-Semitic statements that resulted in John Galliano being questioned by police on Thursday, February 24, Christian Dior immediately suspended its relationship with its designer, pending the outcome of the police investigation.

Today, in light of the deeply offensive statements and conduct by John Galliano in a video made public yesterday, Christian Dior has commenced termination proceedings against him.”

Sidney Toledano, Chairman and Chief Executive Officer of Christian Dior Couture, said: “I unequivocally condemn the statements made by John Galliano which are in total contradiction to the longstanding core values of Christian Dior.”

Natalie Portman, who was supposed to wear a Dior gown to the Oscars but switched to Rodarte after the video became public, condemned Galliano’s behavior.

“I am deeply shocked and disgusted by the video of John Galliano’s comments that surfaced today,” the Oscar winner said. “In light of this video, and as an individual who is proud to be Jewish, I will not be associated with Mr. Galliano in any way. I hope at the very least, these terrible comments remind us to reflect and act upon combating these still-existing prejudices that are the opposite of all that is beautiful.”

Portman appeared as the face of Dior in their Cherie perfume ads.

John Galliano has yet to comment on any of these allegations.