You know all those reports that said Gnomeo and Juliet took the top spot at the box office? Yeah, they were wrong as the number one movie in the nation is the Owen Wilson-starring Hall Pass.

Apparently you all have better things to do than go to the movies. Since the beginning of the year, the domestic box office has been seriously underperforming. It was a pretty lackluster weekend, especially considering that the Oscars spent hours honoring films and the people who make them. 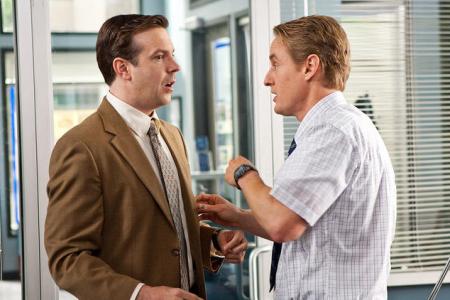 Originally the weekend’s box office reports stated that the animated film Gnomeo and Juliet won the weekend with $14.2 million, giving it the top spot over Hall Pass. Now that the final numbers are in, we know that the comedy about guys with a get out of marriage free card actually beat the red and blue pants off the gnomes. Well, that might be exaggerating, but it was too cute to pass up. Hall Pass walked away with $13.5 million and Gnomeo with $13.4, putting it in second place.

Still, the surprisingly smart animated film featuring the music of Elton John hasn’t exactly failed. It’s made $75.1 million in the past three weeks. We can’t say quite as many good things about Nicolas Cage’s latest, Drive Angry, which only took in $5.2, putting it in ninth place. The Taken wannabe Unknown came in right behind Hall Pass with $12.4, followed by Just Go With It. The public gave Jennifer Aniston’s latest comedy $11.1 this weekend. Poor Justin Bieber. His film Never Say Never is no longer in the top five. Maybe it was the haircut? Here is the breakdown for you: