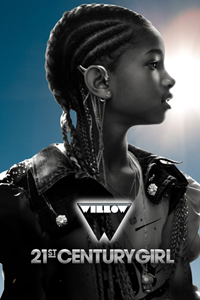 The catchy lyrics start out:

“Gimme an inch, I promise I’ll take a mile/Danger is beauty, I’ll face it with a smile/I’m on a mission with no restrictions/Don’t second guess myself, I’m born to be wild.”

With two songs released, Willow tweeted on January 21: “Are you excited for my album? It’s coming…very soon!”

Willow’s album will be released under Jay-Z’s Roc Nation label.

“It is very cool, because Jay really welcomes me and makes me feel like the record label is a place where I can have fun and talk about my career,” Willow told Vanity Fair. “He and his people make me feel like I’m a part of something.”

Willow is about to kick off her UK tour with Justin Bieber on March 4.

Listen to Willow Smith’s new song, 21st Century Girl, and tell us what you think!