Meredith Baxter sat down with Matt Lauer on the Today show to reveal she was abused by her husband and costar David Birney. 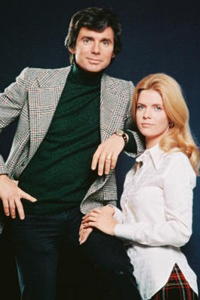 Former Family Ties star Meredith Baxter opens up again to Today show host Matt Lauer. She had told him in a previous interview she was a lesbian, now she shares that her former husband and her Bridget Loves Birney costar David Birney was abusive.

Baxter, 63, said their 15-year marriage was full of emotional and physical abuse — and she shares all the details in her new memoir Untitled. The couple divorced in 1989 and had three children together.

Why did she stay in an abusive relationship for so long? “That’s what everyone would want to know,” she said. “I didn’t know I had a choice. I didn’t know I could go. It wasn’t an accident that we were together. He’s not going to pick someone who’s on top of themselves and confident and aggressive. No, he needs to pick someone for him to be who he needed to be, it needed to be someone who was mousy and quiet and retiring, and that’s what I was.”

Baxter said she got out of the relationship by changing her way of thinking. “I had to look, if I did not want to be a victim — and I’d been committed to being a victim for a long time because it felt really warm and comfortable and familiar — but it was a disastrous position to be in,” she recalled.

She said she felt “un-self-examined” as a child, which is why she didn’t realize she was a lesbian until recently. “People say, ‘You had to have known you were gay.’ I realized, I was so un-self-examined, I could have been a Republican, but no, I’m just gay. That’s much better, don’t you think?”