Like everyone else in the world, even Justin Bieber ages. Bieber is celebrating his 17th birthday today and you might be surprised by his only wish. 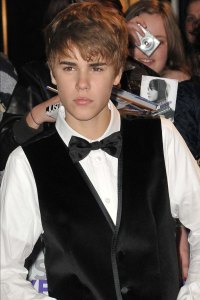 Justin Bieber doesn’t need a lot for his 17th birthday. He’s already got a hit record, a successful movie, tons of adoring fans and one of the coolest mentors known to man — Usher. So, it’s no wonder the recent recipient of a fresh new haircut only wants the simple things for his birthday.

The star recently revealed to E! online he doesn’t have any big plans for a huge bash right now. Instead he wants to munch on his grandma’s cherry cheesecake.

“Hopefully my grandparents will be out here and I’ll be able to spend time, a little bit, with them,” he told E! online. “My grandma makes the best cheesecake, cherry cheesecake. She made it for my 13th birthday.”

Bieber added, “I only have, like, four days, so I’m just going to relax because I start my world tour on March 4 so just going to mentally prepare and just relax.”

Now that he’s stepped out into the public with Selena Gomez, we wonder if they’ll be spending the day together as well. Regardless, he does have one birthday request for his fans. He’d like to get his fans to donate $17 to Charity: Water. “One in eight people in the world lack access to clean water. so this year i want to give my birthday away to help @charitywater #makeachange,” he tweeted.