50’s actress Jane Russell passed away Monday at age 89. Read on to learn how she made her mark on Hollywood.

Gentlemen Prefer Blondes actress Jane Russell passed away Monday in her Santa Monica, Calif. home, her family confirmed. She was 89. Russell — best known for her blond bombshell roles during the 1940’s and 1950’s – died of respiratory problems, according to her daughter-in-law Etta Waterfield. 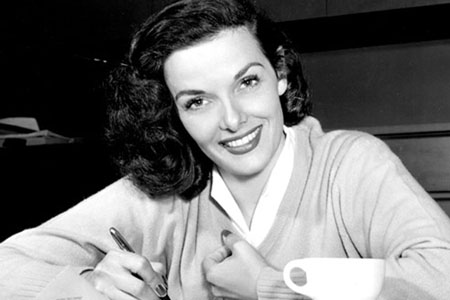 Russell — born Ernestine Jane Geraldine Russell in Bemidji, Minn. — was discovered by eccentric multi-millionaire Howard Hughes after he noticed her working in a doctor’s office. She was later cast as a sex symbol in films like 1943’s The Outlaw and alongside fellow sexpot Marilyn Monroe in Gentlemen Prefer Blondes during the 1950’s.

She later went on to promote Playtex’s line of Cross My Heart bras during the 1970’s. She wasn’t clueless – she knew her success in film was largely due to her 38-inch bustline.

“Except for comedy, I went nowhere in the acting department,” Russell wrote in her autobiography. “The truth is that, more often than not, I’ve been unhappy about the pictures I’ve been in.”

“She always said I’m going to die in the saddle, I’m not going to sit at home and become an old woman,” Waterfield told The Associated Press. “And that’s exactly what she did, she died in the saddle.”