Can’t wait to see Kendra Wilkinson, Wendy Williams and Kirstie Alley dance for the mirror ball trophy on Dancing With the Stars? Be careful what you wish for, they’re part of the latest DWTS cast.

The latest cast of Dancing With the Stars has been revealed and it leaves us wondering — how do they come up with these casts? E! star Kendra Wilkinson, Wendy Williams, wrestler Chris Jericho, Kirstie Alley, Disney star Chelsea Kane, Sugar Ray Leonard, Romeo, model Petra Nemcova and Ralph Macchio will all go step-for step on season 12 of Dancing With the Stars. We love them all separately of course, but Dancing With the Stars? We’ve heard of mixing it up, but these names seem to have been picked randomly from a hat. 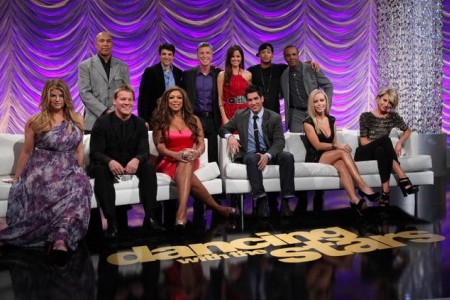 Also included in the line-up are Pittsburgh Steeler Hines Ward and Mike Catherwood.

We know the hottest reality show on American television likes to keep us guessing, but this year’s cast is not only a head scratcher, it’s downright weird. Kendra Wilkinson will definitely be entertaining to watch as she’s been known to shake her booty a few times on her E! reality show Kendra.

But, what do the other contestants bring in terms of talent and popularity? We’re not passing judgment, we just wonder.

Ralph Macchio made the Karate Kid cool before Jaden Smith was even a thought in his famous parents’ minds. Macchio will make us fall in love all over again. But is that enough to keep us watching? He’s the Jennifer Grey of this year.

Two ladies who will definitely be watched, because they’ll either make us cringe or surprise us, will be Kirstie Alley and Wendy Williams. We’ve been waiting for a Kirstie Alley and DWTS pairing, but now that it’s here, are we ready?

What do you think of the newest cast to take the Dancing With the Stars floor? Do you have an early favorite?