The Charlie Sheen interviews on Today and Good Morning America are so epic, we had to give you more quotes! 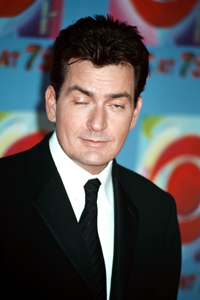 Charlie Sheen is absolutely unrepentant about his lifestyle and war of words with his Two and a Half Men creator and production company. His weekend interviews were so chock full of unbelievable sound bites, we had to give you more!

Sheen said he is superhuman, head and shoulders above anyone else involved in the show and as long as he does his job well, what he does on his own time is no one’s business.

“I’m supposed to be out there all humble and asking for my job,” Sheen said during an interview at home with Mike Walters. “No, I don’t do that. I don’t understand what I did wrong except live a life that everyone is jealous of.”

On Good Morning America, Sheen said he is a legend. “What’s not to love?” he said. “Especially when you see how I party. It was epic. The run I was on made Sinatra, Flynn, Jagger, Richards just look like droopy-eyed armless children.”

CBS got Sheen to agree to a weekend drug test which came back clean, proving the actor hadn’t used in at least 72 hours. But Sheen says, “I am on a drug.”

“It’s called Charlie Sheen. It’s not available because if you try it you will die. Your face will melt off and your children will weep over your exploded body.”

All this time that’s what I thought happened if you shared a hairbrush with Chuck Norris.

Sheen’s longtime publicist Stan Rosenfield quit immediately after the interviews. “I have worked with Charlie Sheen for a long time and I care about him very much,” Rosenfield said in a statement. “However, at this time, I’m unable to work effectively as his publicist and have respectfully resigned.”

He’ll have to cross “total bitchin’ rock star from Mars” off his client list. Maybe Chuck Norris is looking for a rep.