Charlie Sheen’s Good Morning America interview showed his scary side as he justified his increasingly irritated and erratic behavior. Is he beyond help?

Charlie Sheen’s interview on Good Morning America cleared up at least one thing: He’s clean. RadarOnline gave the actor two drug tests — and he passed them both. The tests — administered by a California certified lab — tested for marijuana, cocaine, opiates, amphetamines and alcohol. 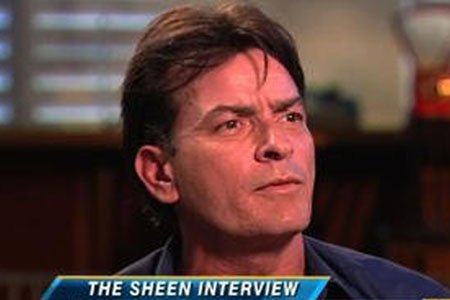 The results were shown during Sheen’s taped interview for Good Morning America — and he passed both. Color us impressed — we thought he was definitely lying about his drug status.

“The good news for Charlie Sheen as he’s watching from home is he tested negative for every single one of those tests,” RadarOnline Senior Editor Dylan Howard said. “The blood test only goes for a window for only 24 hours. The urine tests for some 72 hours. But this is a big win for Charlie Sheen.”

However, that doesn’t explain two things — why is he acting so erratically and why is he looking so thin these days? The Good Morning America interview — one of several interviews he’s given over the past several days — was at times tense. The combative Sheen continued with his odd rants on everything from Two and a Half Men writer Chuck Lorre to his life as a “bi-winner.”

He also plans to sue CBS.

“They’re going to lose in a courtroom,” he said. “So, I would recommend that they do an out-of-court settlement and fix this whole thing and pay the crew and get season nine back on board.”

We’re honestly not surprised at anything Sheen says or does at this point. But, where does it end — and can he get the help he so obviously needs?