Charlie Sheen didn’t hold back during an interview on Today with Jeff Rossen. The troubled actor went on the defense, putting up challenges to CBS’ Two and a Half Men creator Chuck Lorre all while claiming his sobriety.

Charlie Sheen is clean and sober. At least that’s what he’s saying in a new interview aired on Monday morning’s Today show. The Two and a Half Men star sat down with Jeff Rossen to clear the air and take a few more jabs at Chuck Lorre. 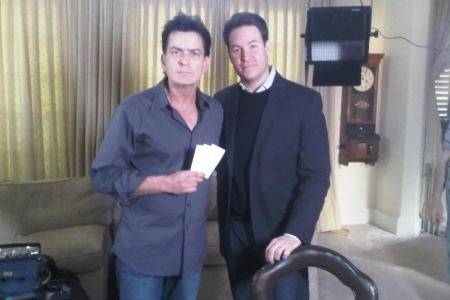 So, is it true Charlie Sheen is clean? According to the actor, “Uh, duh.”

It couldn’t have been that long ago. Charlie Sheen did go off the edge in January during a two-day party that put him in the hospital. But he’s saying it was pure boredom.

The interview didn’t stop there. In the Charlie Sheen interview, he used the opportunity to address the latest war of words between him and Two and a Half Men creator, Chuck Lorre. “My passion is misinterpreted as anger…I don’t think people are ready for the message I’m delivering and delivering with a sense of violent love.”

Sheen used an interesting choice of words to explain his view of Chuck Lorre’s “dictatorial laziness,” saying, “Clearly he didn’t bring gum for everyone.” The actor even brought his own set of questions directed at Chuck Lorre that he wants answers to, including reasoning behind script delays and the crew’s pay halt.

Sheen even went as far as to proclaim, “By Wednesday, they’re going to rename it Charlie Brothers and not Warner Brothers…At this point, it’s 3 million an episode, take it or leave it. Defeat is not an option.” Sheen added that CBS owed him an apology while “licking my feet.”

As for a relapse, Charlie Sheen believes he’ll be fine. He even described himself as having “Adonis’ DNA” and “tiger’s blood” in his veins at one point during the interview. Not sure how that works, but okay.

Did you catch Charlie Sheen on the Today show with Jeff Rossen? What did you think?