The red carpet has been christened with some of Hollywood’s hottest Oscar looks — and some not-so hot looks — now it’s on to the show. Will Oscar crown The King’s Speech with Academy Award gold or will The Social Network pull off a memorable upset? Will The Fighter‘s Melissa Leo keep her Golden Globe-winning streak alive or will her co-star Amy Adams get a chance to shine in Oscar’s spotlight? Find out live during SheKnows’ Oscar night play-by-play. 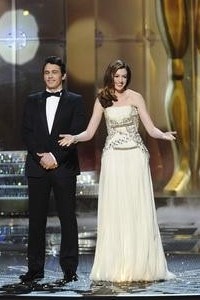 Oscar’s red carpet interviews were a bit of a snooze-fest this year but Hollywood’s elite definitely smashed the fashion where three words came to mind — color, elegance and body!

Vibrant red and orange palettes like Jennifer Lawrence (photo below!) and Jennifer Hudson’s gorgeous hues seemed to be hot choices this year — they could be best dress front-runners. Many of the gowns also seen on this year’s red carpet were body-skimmers with a touch of elegance including Mila Kunis’ romantic lavender number. Everyone wondered what Natalie Portman would dress her baby bump in and now we know. She kept it classy and simple in a fabulous deep purple gown that had draping in all the right places.

Enough of the red carpet fashion. It’s getting close to showtime!

SheKnows has Hollywood’s biggest night covered — the Academy Awards. Whether you’re waiting to see if Colin Firth takes home a Best Actor nod or what kind of trouble Anne Hathaway and James Franco get into, we have it all.

Check back to SheKnows throughout the evening for live updates on the hottest Oscar moments that everyone will be talking about tomorrow! 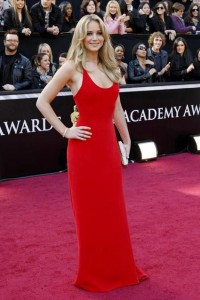 5:00 p.m.
Completely excited for the show to start! As soon as Anne and James hit the stage at 5:30 p.m., we’ll give you our instant reaction!

5:30 p.m.
Anne Hathaway and James Franco just took us on a hilarious ride through the best picture nominees courtesy of Inception. Who else thought the Alec Baldwin cameo was hilarious? Franco plus Hathaway already equals an amazing start to the Oscars!

5:45 p.m.
The first Oscar of the night goes to Alice and Wonderland for Best Art Direction! Exactly as SheKnows predicted!

6:00 p.m.
Melissa Leo did it folks! She is your 2011 Academy Award winner for Best Supporting Actress in The Fighter! “I’m just shaking in my boots!” What a cute way to start an acceptance speech! She really did lose her words, didn’t she? Leo must have forgotten she was on live TV when she let out a nice little swear word. But, did she look beautiful or what?

6:10 p.m.
SheKnows called it and Barbie will be so proud! Toy Story 3 won the Oscar for Best Animated Feature Film! Did you love it?

By the way, are we loving the hip and fresh new show this year? We think it’s working! The set is stunning!

6:16 p.m.
Wow. Aaron Sorkin demanded respect from his daughter’s guinea pig while accepting the award for Best Adapted Screenplay for The Social Network. Was anyone else scared he was going to get ushered off stage? 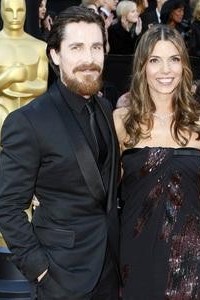 Anne Hathaway parodying On My Own from Les Miserables in a tux while James Franco enters in a tight dress and wig was too funny! Love the shout out to Charlie Sheen!

6:30 p.m.
In a Better World won Best Foreign Film! Wow, you could really feel the emotion in this speech!

6:35 p.m.
We called it from the start! Christian Bale won the Best Supporting Actor Oscar for The Fighter! Bale asked, “What the hell am I doing here?” He doesn’t need to even ask! His performance was awe-inspiring! Wouldn’t you agree?

6:50 p.m.
For all you sound buffs out there, this Oscar’s for you! Inception won both Sound Mixing and Editing honors!

Okay, we are almost at the halfway point! What is everyone thinking so far? We think the girls are looking gorgeous, the hosts are keeping it easy and the awards are going to the right actors!

7:00 p.m.
Wolfman has won the award for Best Make Up! We knew it would! Come on, there was some serious transformation going on in that movie! “That’s gross” is right Cate Blanchett! 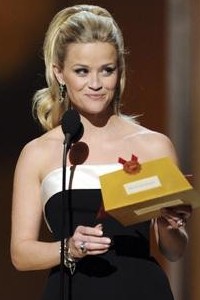 7:10 p.m.
Who doesn’t love Randy Newman on a piano with Toy Story 3 playing in the background? That was a great performance of We Belong Together! Who wants to go give their friends a hug after that set?

Zachary Levi and Mandy Moore sounded and looked beautiful singing I See the Light from Tangled! We are in love with Mandy Moore’s gown!

7:15 p.m.
Best Documentary Short goes to Strangers No More and Best Live Action Short goes to God of Love. Luke Matheny said, “I should have got a haircut!” Who loved his out of control fro?

7:20 p.m.
OMG, it’s the year of the musical movie! Did anyone else go absolutely nuts over seeing Harry Potter and Twilight mixed to some crazy fresh beats? Was this the musical Twilight rumor we were waiting for? Watching sexy vamps sing about their shirts to a remix? We think it was!

7:25 p.m.
Oprah Winfrey looked stunning handing out the award for Best Documentary to Inside Job!

7:35 p.m.
Robert Downey Jr. and Jude Law, our favorite Sherlock Holmes duo, handed out the award for Best Visual Effects to Inception and Best Editing to The Social Network! The Social Network is really taking home some Oscars! Could they upset The King’s Speech for Best Picture? 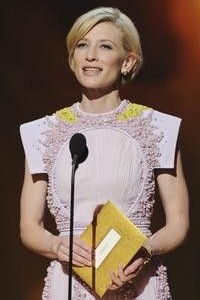 Wow, Jennifer Hudson looked amazing introducing Florence Welch! Welch stepped in at the last minute for a pregnant Dido and sang If I Rise from 127 Hours beautifully.

7:50 p.m.
Randy Newman accepted the Oscar for Best Original Song for We Belong Together from Toy Story 3! He might get our vote for funniest speech of the night. You’re totally television friendly, Randy!

7:55 p.m.
Celione Dion did a wonderful job singing Smile in memory of those we lost over the year. For some reason, we thought there might be a tissue needed afterwards, but it was beautiful rather than sad. It was nice to see Lena Horne get a personal shout-out!

8:05 p.m.
The King’s Speech just took one of the big Oscars! Tom Hooper won Best Director for The King’s Speech and he really had his mom to thank! Turns out, she rang him up after attending a reading of the untitled story in London! She knew it was his next film! So, sweet! Now Tom Hooper is a 2011 Academy Award winner! 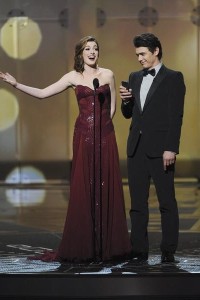 Natalie Portman has won her first Academy Award for Best Actress in Black Swan! The mom-to-be was obviously shaking inside but she held it together as she gave immense gratitude to her fellow nominees for inspiring her. In her long list of those she wanted to thank, Portman gave a special thank you to her fiance and child’s father Benjamin Millepied!

8: 26 p.m.
The King’s Speech took another big Oscar honor with Colin Firth’s Best Actor win! Firth looked poised, keeping it cool as he gave out thanks to Helena Bonham Carter and Tom Hooper, among others. So glad they didn’t cut his or Natalie Portman’s speech!

What an amazing night in film! Stay with SheKnows for our Oscar night recap, best and worst dressed and interviews with the winners backstage in the press room!