Diana Ross stopped by to chat with Oprah today and was unexpectedly reunited with an old co-star. What did Diana Ross have to say to Oprah?

The iconic Diana Ross visited Oprah today to talk about her legendary career and even reunited with former co-star Billy Dee Williams! Ross and Williams were regular co-stars during the 1970’s and appeared together in 1972’s Lady Sings the Blues and 1975’s Mohogany. 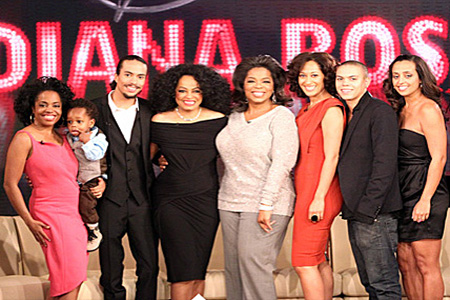 Despite the excitement, Oprah admitted she was a little worried about bringing Williams out with first telling Ross.

“I take full responsibility because my staff said to me, ‘Di — Miss Ross — she does not want any surprises,'” Oprah said. Luckily, it turned out well.

“Being a parent is very important to me,” Ross told Oprah, referring to her children Rhonda, Tracee, Chudney, Ross and Evan.

“Somehow, despite how large her career and her persona [have] been, she has helped us not feel in her shadow,” Ross’ oldest daughter Rhonda said. “We can be ourselves. She somehow helped us to have that.”

“There was a sense of routine and normalcy,” daughter Tracee added.

Ross rounded out her appearance by giving a tearjerking performance of Ain’t No Mountain High Enough. It was all enough to make Oprah emotional.

“I have to really keep myself from going into the ugly cry,” Oprah said. “Because of how much this legend, this woman means to me and my life. … I’m going to try to keep it together.”

But while Oprah’s syndicated show is coming to an end, that doesn’t mean Ross’ career is doing the same.

“I think that if my voice for some reason changes — because your voice does change — then it’s time for me not to sing.”

What did you think of Diana Ross on Oprah?