The web is buzzing with rumors that General Hospital star Kelly Monaco is leaving the popular soap opera. Is there any truth to the rumor? 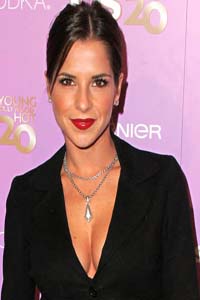 Is Kelly Monaco getting ready to leave Port Charles and General Hospital for good? That’s the rumor going around the web this afternoon — and we’re not really sure where it started. The actress has played Sam McCall on the popular daytime drama since 2003 and her departure would certainly upset fans of the show.

However, we certainly couldn’t blame her for wanting to pursue other projects if she is in fact leaving General Hospital. Monaco overcame judge criticism and wardrobe malfunctions to win the first season of Dancing With the Stars. She’s was also a Playboy Playmate, so she definitely has the looks to build a good career.

We tried to find Monaco on Twitter to see if she’s talking, but we can’t find a verified account for the soap star. Guess we will just have to wait and see if anything else comes out — and we’ll be the first to let you know.

Update: SheKnows reader Christine clued us in on the Kelly Monaco rumors.

“It’s a rumor because on today’s show she was killed off … it was a cliffhanger at the end, and though they showed her body, I’m sure there’s a twist,” Christine wrote.

Interesting — but we think Christine is right. Soap operas thrive on twists and maybe she’ll come back as her character’s evil twin? It happens all the time.

Do you think Kelly Monaco is leaving General Hospital or is her character just taking another direction?