Kelsey Grammer and Kayte Walsh tied he knot today in New York City just weeks after finalizing his divorce from Camille Grammer. Who attended the wedding and who was noticeably absent? 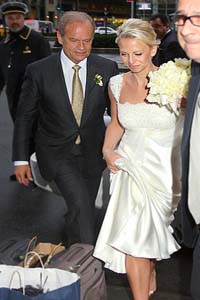 Maybe the fourth time is the charm? Kelsey Grammer wed fiance Kayte Walsh at NYC’s Longacre theatre, according to his rep.

The couple exited the theatre after the ceremony into a waiting white Mercedes. The couple is due to meet 150 guests latest at a lavish reception in the Plaza Hotel’s iconic ballroom. The reception — with a price tag of $100,000 — will feature ginger prawns, filet mignon au poivre, slow-roasted turkey breast with chorizo stuffing and braised short-ribs, according to TMZ.

As for the cake? It’ll be white, of course.

“They’re going to have a delicious carrot cake,” cake designer Sylvia Weinstock told Us Weekly. “It’s about 55 inches tall. A grand cake, decorated with sugar flowers, in shades of white and cream. It’s going to be a fantastic showpiece.”

The wedding comes just weeks after Grammer signed a $50 million divorce settlement with ex-wife Camille Grammer. Camille, star of The Real Housewives of Beverly Hills, is not expected to attend the reception.

Read on for more Kelsey Grammer