Do you like chick flicks? Well, you’re in luck as the trailer for Something Borrowed starring Kate Hudson has just premiered!

The trailer for Something Borrowed has premiered online. The film is based on the 2005 novel by Emily Giffin and tells the story of best friends Rachel (Ginnifer Goodwin) and Darcy (Kate Hudson). Rachel has had a crush on Dex (Colin Egglesfield) since law school. She lets Darcy take over the moment she might have hooked him and years later, she’s part of their wedding planning. 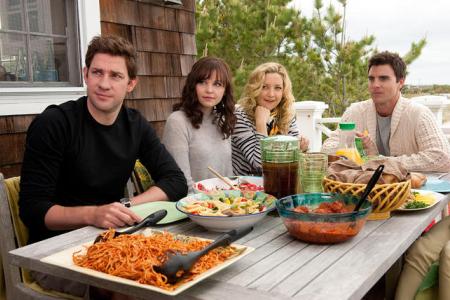 Darcy and Dex are getting married and poor Rachel is still in love. Darcy isn’t making Dex happy. She’s a bit of a bridezilla who plans everything down to fake crying to make sure her mascara won’t run the day of the wedding. Rachel is still suffering from a hard core crush and ends up in bed with Dex on her thirtieth birthday. So is he really the one? Should she pursue true love even if it hurts her friend? Or is there someone (John Krasinski) waiting in the wings?

The novel took on the stigma women face being single and in their thirties and the ethics of an affair versus true love. There are definitely moments in the trailer that address this, but it remains to be seen how much the film will center on that.

Something Borrowed will be released on May 6, 2011.