James Franco and Anne Hathaway host the Academy Awards February 27 and a bevy of Hollywood’s stars will be there. After the red carpet fun, Oscar nominees and former winners will take the stage as presenters, the winners will be announced and Gwyneth Paltrow, A.R. Rahman and Florence Welch, Zachary Levi, Mandy Moore and Alan Menken as well as Randy Newman are set to perform. 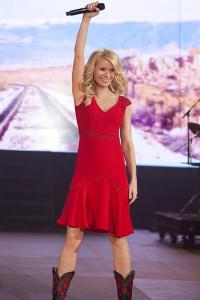 Hollywood Boulevard has been closed for days in preparation for this Sunday’s 83rd annual Academy Awards. The big night at the Kodak Theatre promises red carpet glam, bright lights, gold statues and, hopefully, short thank you speeches. With rain in the forecast, we might also see some umbrellas!

The preview spots featuring hosts James Franco and Anne Hathaway “in training” suggest 2011’s Oscar night could be a goofy good time, but we can also expect some serious stars and performers to take the stage.

The evening will also feature performances of Oscar nominated music.

Gwyneth Paltrow, who rocked the Grammy Awards with Cee-Lo Green earlier this month, is set to perform Coming Home from her movie, Country Strong.

Original Song nominee A.R. Rahman teams up with Florence Welch, of Florence and the Machine, to perform If I Rise from 127 Hours.

Zachary Levi and Mandy Moore will perform I See the Light from Tangled, accompanied on piano by Alan Menken, who is nominated for writing the music for the song.

Randy Newman will perform his nominated song We Belong Together from Toy Story 3.