Taylor Swift has moved on from Jake Gyllenhaal! The hit singer was recently seen on a date with Glee star Chord Overstreet. 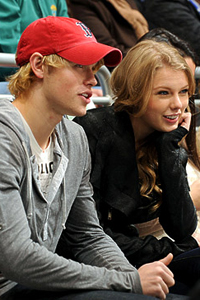 Taylor Swift and Glee star Chord Overstreet were spotted at a very public spot for a hot date. The couple attended the L.A. Kings hockey match on Thursday.

“They looked pretty good together,” a source tells UsMagazine.com.

Swift made the first move by calling up Overstreet on Wednesday to talk to him about writing a song together. They were spotted together the very next day at the hockey game. Afterwards, sources said they had dinner together.

Could this be the start of a budding romance — or merely a business meeting? “Chord is into her. He will definitely pursue this,” the insider snitched. “Chord’s a ladies’ man.”

Hopefully there will not be any tension on the Glee set, as Swift dated Cory Monteith in the past.

Tell us: Do you think Taylor Swift and Chord Overstreet make a cute couple?