Sixty-nine years ago today a real Battle: Los Angeles took place. As the Columbia Pictures film starring Aaron Eckhart and Michelle Rodriguez hits theaters March 11, we are reminded of what happened in Los Angeles on a scary night 69 years ago.

It was merely weeks after Pearl Harbor was bombed and the West Coast of the United States was unnerved to say the least. What happened on the night of February 24 through February 25 would completely rock the entire community of Los Angeles. 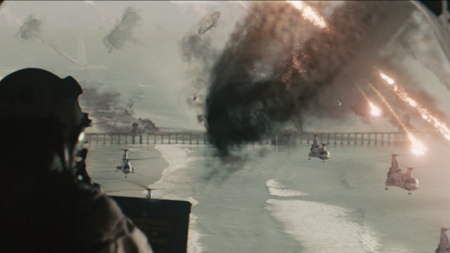 “The obvious thought was that these were Japanese bombers come to attack the United States,” said UFO expert Bill Birnes, publisher of UFO magazine.

“But it wasn’t. They were flying too high. And the astounding thing was, not one artillery shell could hit the craft — out of all the hundreds of shells that were fired. People outside that night swore that it was neither a plane nor a balloon — it was a UFO. It floated, it glided. And to this day, nobody can explain what that craft was or why our anti-aircraft guns couldn’t hit it. It’s a mystery that’s never been resolved.”

On the ground the night of the real Battle Los Angeles, General George C. Marshall, yes that General Marshall, wrote a memo to President Franklin Roosevelt. “Unidentified airplanes traveled at speeds ranging from very slow to as much as 200-mph and from elevations of 9,000 to 18,000 feet.”

Initially as the Los Angeles Times and others were reporting on the event, government officials denied anything out of the ordinary. When the public joined the conversation wondering what had happened during the night of February 24 into the morning of February 25, the Army finally offered an answer that the presence of the craft was real. Santa Monica’s U.S. Congress representative even demanded a Congressional investigation that never materialized.

The filmmakers of Battle: Los Angeles were inspired by the true events of 1942 that happened 69 years ago today and began crafting their story that stars Aaron Eckhart and Michelle Rodriguez. In the film, aliens begin their attack by landing in the Pacific Ocean off of Santa Monica to start their assault on Los Angeles. In the real Battle of Los Angeles in 1942, there was no return fire from the unidentified ship. Despite an onslaught of shelling towards the object — residents of downtown Los Angeles reported hearing the bombs — the craft was not destroyed and simply moved towards Long Beach before returning to the Santa Monica area, then disappearing into space.

Check out the real newsreel footage of the 1942 Battle of Los Angeles below and let us know what you think.

With a premise that is rooted in historical fact, Battle: Los Angeles should be a film that brings its thrills with an equal amount of chills because of its roots in reality.