Listen to the bizarre Charlie Sheen interview with radio host Alex Jones that resulted in CBS executives suspending Two and a Half Men indefinitely. 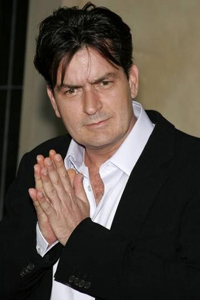 Two and a Half Men executives were growing increasingly concerned over Charlie Sheen’s erratic behavior, but the rants and insults (especially to show creator Chuck Lorre) that he spewed during the radio interview with Alex Jones were the final straw that got him fired.

CBS released a statement saying that “based on the totality of Charlie Sheen’s statements, conduct and condition,” they have decided to “discontinue production of Two and a Half Men for the remainder of the season.”

Sheen, who makes around $2 million per episode, quickly responded in a letter to TMZ, saying:

“What does this say about Chaim Levine (referring to show creator Chuck Lorre) after he tried to use his words to judge and attempt to degrade me? I gracefully ignored this folly for 177 shows. I fire back once and this contaminated little maggot can’t handle my power and can’t handle the truth. I wish him nothing but pain in his silly travels especially if they wind up in my octagon. Clearly I have defeated this earthworm with my words — imagine what I would have done with my fire breathing fists.”

Sheen has told RadarOnline that he is starting his own show, called Sheen’s Corner, on HBO for $5 million an episode!

“I’m close to securing a deal with HBO for a 10 show guarantee,” he said.

HBO has not confirmed or commented on this statement.

Listen here to the Alex Jones radio interview that started it all. He talks about politics and Obama in the beginning of the interview, so jump to the 2:30 mark to listen to him start in on the rant.