Charlie Sheen has been put on the unemployment line indefinitely after a scathing radio interview. 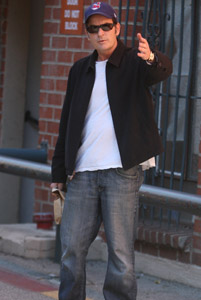 Charlie Sheen has cost a lot of people a lot of money this season, and it’s about to get worse. CBS and Warner Bros have put Two and a Half Men on an indefinite hiatus that will last at least through the end of this season after the actor lost his mind in a radio interview.

Charlie ranted nonsensically about how awesome he is, how AA sucks and how everyone’s wife is ugly.

“They lay down with their ugly wives and their ugly children and just look at their loser lives and then they look at me and say, ‘I can’t process it.’ Well, no, and you never will! Stop trying! Just sit back and enjoy the show.”

“News-flash. I am special and I will never be one of you. The only thing I’m addicted to right now is winning. My success rate is 100-percent!”

“I was shackled and oppressed by the cult of AA for 22 years. I finally extracted myself from their troll hole and started living my life the way I want to live it. It’s vintage, outdated and stupid and it’s followed by STUPID people. I hate them violently. They will come at me. Debate me on AA right now. I have a disease? Bullshit. I cured it right now with my mind. I cured it, I’m done!”

“I violently hate Chaim Levine,” Sheen said. “He’s a stupid, stupid little man and a pussy punk that I’d never want to be like. That’s me being polite. That piece of [profanity] took money out of my pocket, my family’s pocket, and, most importantly, my second family — my crew’s pocket. You can tell him one thing. I own him.”

The network has finally had enough. In a statement to TMZ, CBS and WB said, “Based on the totality of Charlie Sheen’s statements, conduct and condition, CBS and Warner Bros. Television have decided to discontinue production of Two and a Half Men for the remainder of the season.”

Charlie will surely blame his crew’s financial loss on producers once again, instead of laying the blame where it squarely belongs: On his own crack pipe.