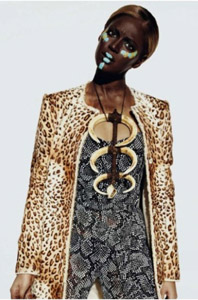 French fashion magazine L’Officiel Paris featured Beyonce in a myriad of African-themed wardrobe shots, but it is a single photo of the singer with a heavily darkened face and neck that has some crying racism.

“Given the controversial history surrounding blackface, it’s impossible to believe that both Beyonce and her team didn’t think of the racial implications in painting her face,” said Steven J. Horowitz, Associated Editor at YRB Magazine. “In an age when racism is still a prevalent issue, and where other artists like Will.i.am have faced backlash for darkening their skin, she should have realized that anything remotely resembling blackface would raise fire from the smoke.”

Writes Jezebel’s Dodai Stewart: “It’s fun to play with fashion and makeup, and fashion has a history of provocation and pushing boundaries. But when you paint your face darker in order to look more ‘African,’ aren’t you reducing an entire continent, full of different nations, tribes, cultures and histories, into one brown color?”

“Blackface is not fashion forward or edgy and, in my opinion, it is just flat-out offensive,” wrote Charing Ball of the Atlanta Post.

But the magazine says their vision was more “United Colors of Benetton” than “The Al Jolson Minstrel Hour.”

“A queen, a goddess, Beyonce is a bombshell beauty with a divine voice. We’re thrilled she’s opening a season of celebrating the 90th anniversary of L’Officiel de la Mode. The series was conceived as using art and fashion in paying homage to African queens,” the magazine noted in a statement. “Beyonce mentioned the artist Fela Kuti in the interview as one of her musical inspirations. It was later misquoted as the inspiration for the shoot. We would like to clarify that it is not the case.”

“As for the artistic makeup, the inspiration came from several African rituals during which paint is used on the face. We find the images beautiful and inspiring,” the statement concluded.