The wolfpack is back! The Hangover 2 trailer has just been released — and, from the looks of it, Thailand makes Las Vegas look tame.

The trailer for The Hangover Part 2 shows Bradley Cooper (Phil), Ed Helms (Stu) and Zach Galifianakis (Alan) looking more hungover than ever! In the follow-up to the hit 2009 movie, the crew decides to ditch Las Vegas and throw Stu’s bachelor party in Bangkok. Stu decides he wants a classy and subdued pre-wedding celebration — and decides Thailand will be the perfect spot. Does he get his relaxing bachelor party? Doesn’t look like it! 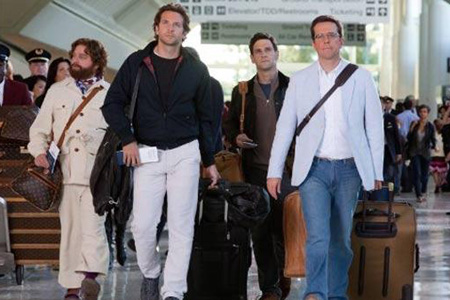 Justin Bartha (Doug) is nowhere to be seen in the trailer (is he lost again?), however, Alan has a shaved head, Stu has a strange tattoo on his face and Phil seems to have acquired a pet monkey.

Directed again by Todd Phillips (The Hangover, Old School), this movie features cameos by former US President Bill Clinton, as well as Liam Neeson, who is rumored to play a tattoo artist. Mel Gibson was initially cast in Neeson’s role, however, he was taken off the movie after the cast and crew protested.

Other cast members to appear in The Hangover 2 include Ken Jeong, Jeffrey Tambor, Mike Tyson and Paul Giamatti.

The Hangover was a massive success, grossing around $470 million worldwide — and won a Golden Globe for best comedy! Will the sequel have as much success? Watch the trailer for The Hangover 2 and tell us what you think.

The Hangover 2 is set for release on Memorial Day weekend on May 26.

read on for more Hangover cast