Claire and Phil have a doozy of a fight on Modern Family: Regrets Only. Pandemonium hits the sky on The Middle: Hecks on a Plane. New York Yankee outfielder Nick Swisher guest stars on Better with You, and crazy is redefined on Mr. Sunshine: Heather’s Sister.

First at 8 p.m., the Heck clan is over the moon when Sue wins a trip to the Big Apple on The Middle: Hecks on a Plane. It looks like they all make the trip, even though Sue only wins four tickets, but anything that can go wrong does on their bumpy ride to New York. It gets so rough the other passengers might just prefer snakes on their plane over the Hecks! Frankie (Patricia Heaton), Mike, Axl, Sue and Brick are hit repeatedly by Murphy’s Law in the air, but perhaps their time in the city will go better… 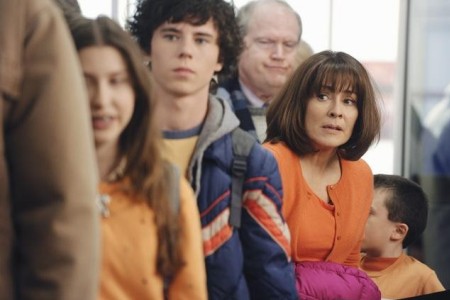 Then on Better with You: Better with a Shamrock, Ben is determined to get his name on a shamrock at his favorite bar. The family’s “unlucky” jacket may just kill that dream. The one time Ben wore it, he accidentally dropped his blanket on New York Yankee Nick Swisher, who guest stars in the episode, along with his wife, JoAnna Garcia Swisher. It turns out Swisher bought that sham’rocking bar and Ben is sure Swisher will recognize the fan who once made him miss a fly ball. Meanwhile, when Vicky tries to get her girls to accompany her at a charity event, Mia and Maddie use their secret language to communicate their disinterest. 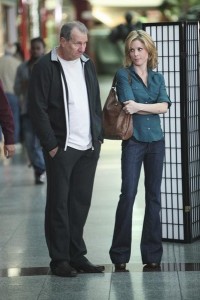 Next, at 9 p.m., Claire has a huge meltdown on Modern Family: Regrets Only. She’s so mad she sleeps on the couch! Phil has no idea what set her off, but tries to make peace anyway. Gloria (Sofia Vergara) and Jay step in to mediate the fight, while Jay and Cameron both make decisions they may live to regret elsewhere. Jay’s mistake is getting Gloria a karaoke machine and Cam’s is calling in Mitchell and Luke as reinforcements for his big fundraiser. Cam’s looking forward to earning bragging rights with the big event, but Mitchell and Luke may earn him a different rep entirely.

Then on Mr. Sunshine: Heather’s Sister, Heather surprises Ben by sending him on a blind date with her sister. Ben and Stephanie seem to be a great match at first, but he quickly realizes she’s a total nut. (It’s never a good idea to let someone who once set a man on fire choose your dates!) In spite of his reservations, Ben gets roped into joining Roman on a double date with the sisters and round two with Stephanie doesn’t get any better. Meanwhile, Crystal chooses Alonzo to escort her winning Yorkie to a dog show and it’s game on for Alice, who is determined to impress her visiting frenemy. Will the guys come through?

The laughs start at 8 p.m. on Wednesday, February 23 on ABC, followed by a new episode of Off the Map.